For January's UFO Challenge and to meet one of my sewing side goals of 2016, I decided it was time to knock out some of those UFO's that have been sitting around for awhile, waiting to get done.

First, I hemmed two sides on a golden super lightweight silk to create a SASH (#1), then finished the cotten silk blend Edwardian over-skirt (#2) from two years ago I never finished, then hemmed the three sides on an off-white organza triangle to create a FICHU (#3), then I made two more PILLOW COVERS (#4) using small pieces of 'designer' drapery fabric and blue silk dupioni from the stash, and then I hand-sewed an orange silk taffeta MUFF (#5) (I plan to decorate it more in future) which was just lying about with a few stitches started, and finally, I did my bodice fixes (#6) and add trim to the waistline of my mustard yellow cotton early 19th century crossover GOWN. I have more trim I was planning to add around the trim as edging but I may decide to leave it here. Either way, it's better fit & now wearable again!

Secondly, in the interest on further meeting the challenge, I started (but didn't finish) a project (#7)  I have been putting off for a very long time: a Robe a la Francaise. I used the J.P. Ryan pattern and created a muslin, then re-drew and created a second muslin for fitting, and now I've cut out the gown and ready to start sewing it together (finally), after many years of procrastination over doing this style of dress. I have been researching the drape, fit, style, fabrics, designs, and overall look of this style of gown for many months now.

There is so much about this silhoutte that is both different and shows how the back pleats down the center in a single length of fabric in the Robe a la Francaise and shorter Pet 'en lair, with loose pleats are later 're-purposed' into the 'en fourreau' pleats of the English gown en fourreau, which is pleats sewn down but a single length of fabric down to the floor. What a neat style and lots of fun to make and wear!

My aim is to have in done in time for the 5th Annual Francaise Dinner, so wish me luck!
I'm really happy to start off January meeting the Procrastination challenge by knocking out quite a few UFO's AND working on a dress that I have been procrastinating starting on for many years! 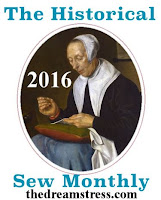 The Challenge: Procrastination - finish a garment you have been putting off finishing (a UFO or PHD) or make something you have been avoiding starting.

Fabric: various fabrics from the UFO's.

How historically accurate is it? sash - very, fichu - very, pillows - I believe the fabric and print is appropriate, over skirt - by all accounts yes, muff - definitely, cross over gown - very accurate cut and fabric and fit - a bit high neckline, JP Ryan - will be very accurate.

First worn: None of them yet, will use most this year!

Total cost: Stash, stash, stash - Sash - fabric bought on super sale long ago, fichu - fabric free from a friend, pillows - bought for $20 each many years ago - the remnants I used were VERY cheap, over-skirt - from stash years ago, orange silk taffeta - sale remnant, and cross over gown - stash fix, and Francaise - the fabric was sale from Fashion District, I'll post about it later.

Posted by theladydetalle at 4:56 PM No comments:

2016 Sewing Plans & Goals: my plans for 2016 sewing include some over-arching goals, which will be the main focus versus the individual plans.

Basically this means that I find time to sew fun things, be creative with ideas, trim, make accessories, change up current outfits and more, by focusing on being creative whenever possible, vs. fast sewing for events. I did this a good bit in 2015, and I am so happy with the results: I love sewing under creative inspiration.

I need to sew some more clothes for my honey, including an early 19th century jacket and probably another late 18th century one, as well as finish up a lot of buttons & buttonholes. I want my honey to have some great outfits.

I really want to get going on some other eras besides the main two that I focus on, late 18th century and early 19th century. While I've sewn some things outside of these, I need to get working on undergarments or corsets for these other eras, so that I can eventually get these other gowns made! This includes Victorian (1870's-1880's) and 1830's up first, plus the fact that it's getting time to make new late 18th and early 19th century stays to replace my current ones. Also I want to delve into things I've planned for years but never have made, including a Robe a la Francaise and a Regency sari dress.

Other goals besides the main three include:

Having plenty of HAND-sewing projects ready to go at a moment's notice: I love, love, love to hand sew, and I find I get the most sewing done when I have something I can work on with some good hand sewing waiting for me. If it requires thought, muslins, reading patterns and such, it takes me that much longer to work on it, so I need to prep some projects for hand sewing, which is what I can mainly get done as work takes so much out of me each day/week.

Sew for events in advance: Francaise Dinner is in March, and Costume College in July, I'll definitely be making some new things! I'd love a new dress for Pumpkin Tea this year. Also an overseas costuming trip in future, and I need 1 or 2 new Regency dresses and my husband needs quite a few things to wear. Also lots of other future events that I want to attend, both local and far. So I want to plan for these things by sewing things far enough in advance to have enough time and also to enjoy the process, as well as allow myself time for Creativity along the way.

Sew from the STASH whenever possible: I did good on stash sewing in 2015, and I need to continue this trend in 2016. This doesn't mean I won't buy more fabric (I don't want to pass up on good deals on silk and I need to add more linen & cotton to the stash), but it does mean I need to focus on making things I've been planning with fabric on hand, or using fabric on hand for other purposes to continue to use stash.

If I have time, another goal is finish up some UFO's if I can. I have a bin of UFO's that I need to either finish, make plans to finish, re-purpose or discard. It's not a primary goal but it's something I want to keep in mind as the year goes on.

PLANNED for 2016:
-Robe a la Francaise including new petticoat & shoes
-Late 18th century men's jacket for HB
-Early 19th century men's jacket for HB
-Regency sari dress
-Early 19th century Regency bee spencer
-Napoleonic bee gown  & shoes
-Corsets/Stays - Victorian and/or start working on new late 18th or early 19th century ones
-Tiffany blue marabou robe/lounging gown
-Creative fun & colorful costume to wear to CC
-Something 1920's-1940's
-More outerwear - what can I say, it's really fun to make & wear!
-A muff I've had in my mind for a looooooong time: time to make it!
-Some form of 18th century dress or jacket with a hood - just because
-And more things covered in marabou. And fur. Because yeah.

Well, 2015 was a bit of a rough year with LIFE stuff but I did manage to get quite a bit of sewing done, especially in the second half of the year. Once we moved and I had a dedicated sewing room again, I was able to work on a lot of projects, and get a lot done! As you see, I completed only a portion of my PLANNED sewing in 2015, however, I also completed a large amount of UNPLANNED sewing in 2015, as I let inspiration take hold, and worked on all kinds of fun cape & accessory projects.

Posted by theladydetalle at 1:07 PM No comments: